I am very pleased to have been asked to close the Blog Tour for Faith Martin’s brilliant new book Murder of the Bride, published by Joffe Books on the 28th October 2017.

Looking for a brilliant best-selling murder mystery with a feisty female detective?

Then meet DI HILLARY GREENE, the police woman with a nose for the truth.

DI Hillary Greene is called out to attend a suspicious death at Three Oaks Farm in the picturesque village of Steeple Barton.

The large farmhouse is filled with music and revellers, but when she steps into the farm’s large cowshed, Hillary finds a dead bride. Dressed in a gorgeous and sumptuous white gown, the young, beautiful redhead had clearly been strangled.

But not everything is what it seems, and the victim turns out to be at the centre of a web of jealousy and intrigue in the close-knit village. Many of the villagers have a motive for murdering her but they’re not giving up their secrets easily.

Can Hillary discover the real reason for this brutal crime and cope with the spiralling revelations about her dead ex-husband?

This is a crime mystery full of well-observed characters, which will have you gripped from start to finish.

MURDER OF THE BRIDE is the third in a series of page-turning crime thrillers set in Oxfordshire.

THE LOCATION
North west Oxfordshire is farming country, and parts of it belong to the Cotswolds area of outstanding natural beauty. Here the river Cherwell wanders through buttercup-strewn water meadows, where both sheep, horses and cattle graze. Spotted with woodlands, meandering narrow country lanes, and home to re-introduced soaring red kites, buzzards and other abundant wildlife, its thatched cottages and ancient farmhouses could be featured on any number of chocolate boxes. But don’t be totally fooled — it’s very much a working environment, and farmers are out in all seasons, tending their crops and livestock. And under the bucolic surface, dark secrets lurk.

DI Hillary Greene
An attractive woman in her forties, Hillary Greene is a police officer of many years’ experience, and came up through the ranks. Consequently, she knows how the system works, and is fiercely loyal to the force without being blinkered to its faults. She is a long-standing friend of her immediate superior officer, ‘Mellow’ Mallow and enjoys a rather enigmatic relationship with the steely Superintendent Marcus Donleavy. Popular with the rank and file for her no-nonsense attitude and competence.

DCI Philip ‘Mellow’ Mallow
Mel appreciates Hillary’s first-rate ability to solve her cases, and isn’t happy about her harassment by the officers from York. Known for his sartorial elegance and laid-back manners, he has a sharp mind, and an eye for the ladies. A good friend and ally for Hillary in her recent tribulations, he’s determined to keep his best investigator focused on the problems at hand.

PLEASE NOTE THIS IS A REVISED EDITION OF A BOOK FIRST PUBLISHED AS “NARROW IS THE WAY.”

Yet again this is another brilliant book by Faith.  I really like the way she has developed all the characters over the three books, but also made it possible for anyone new to the series to read them all as stand alone books.

This book follows Hilary as she investigates the murder of a woman, dressed in a bride’s costume hence the title of the book.

The book itself is a great read, which once I started it I didn’t want to put it down.

This story follows on nicely from the previous books with more of the back story involving the characters, and bringing in more people along the way.

There are lots of suspects in this book, and with all the twists and turns I couldn’t get anywhere near the correct suspect until the end of the book.  Hilary also gets confused throughout the book for a while until she starts to piece everything together and her, along with the team, start to reduce the list and eventually narrow it down to the murderer.

Overall I would give this book 5 stars and I can’t wait for the next one, Murder in the Village, which I will be reviewing on the 19th November, and is released in the next week or so. 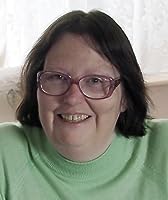 Faith Martin has been writing for over 25 years, in four genres and under four different pen names. She was born in Oxford and sets most of her crime novels within sight of the city of dreaming spires. A real nature lover and afficionado of the countryside, descriptions of wildlife and native flora often find their way into her manuscripts. Right now, JOFFE BOOKS are re-issuing the first eleven of the DI Hillary Greene novels in new updated editions! And the first of these, MURDER ON THE OXFORD CANAL is available now, with the others to very quickly follow.
Her romance novels, written under the name of Maxine Barry, are now available from Corazon Books. IMPOSTERS In PARADISE, and HEART OF FIRE are both out, and others will very quickly become available in the future.
Her first foray into writing ‘spooky’ crime, (and written under the pen name of Jessie Daniels) comes out in November 2017. THE LAVENDER LADY CASEFILE is published by Robert Hale, an imprint of Crowood Press.
As Joyce Cato, she writes more classically-inspired ‘proper’ whodunits. So if you like an amateur sleuth, plenty of clues and red herrings, plus a baffling murder mystery to solve, these are the books for you.

8 thoughts on “#Blogtour Murder of the Bride by Faith Martin”