Today I am very excited and pleased to be on the blog tour for the re-release of Stewart Giles book Boomerang, which is self-published. 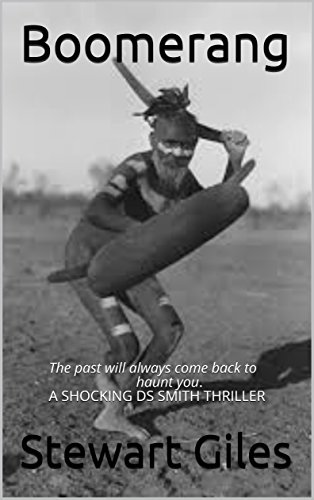 A MAN IS KILLING PEOPLE IN YORK!

Initially the murders appear to be the random acts of a maniac.

Detective Jason Smith is put in charge of the investigation. It soon becomes clear that the murders are all connected to him in one way or another.

All of the killings correspond to events in Smith’s life and the murderer leaves dates at the crime scene which tie up to important dates in Smith’s history. When one of the dates is a time before Smith was even born, he realises he must look deep into the past to find a way to stop the worst spate of murders in York’s long history.

As the countdown begins can Jason catch York’s first serial killer before it’s too late?

This is a fast-paced page-turner that has so many twists and turns it keeps the reader guessing right up to the shocking end.

If you like Police Procedurals, then this is a series you won’t want to miss.

York is a historic walled city in North Yorkshire, England.

At the confluence of the River Ouse and Foss, York is the traditional county town of the historic county of Yorkshire. York Minster and a variety of cultural and sporting activities make it a popular tourist destination.

DS Jason Smith is an Australian who was sent to York to live with his Grandmother when his sister disappeared from a beach.  He has suffered many losses in his short life and is now a dedicated detective.  He is a bit of a loose cannon he has his own way of doing things and that doesn’t always mean following orders and procedures.

DS Thompson is of the same rank as Jason, but he doesn’t have the same support or success.  He and Jason have a love/hate relationship which brings a bit of humour to the series.  Thompson is old school and thinks his age should give him respect and privileges, but life doesn’t work that way for him.

DC Erica Witton is Jason’s preferred partner they work well together and share a bond.  She isn’t always appreciated by Jason, but they care about each other and that brings a different dimension to the series.

What readers are saying about Boomerang:

‘It’s fast-paced and action-packed. I look forward to reading the next book in Smith’s adventures.’ – Linda Strong

‘What a great page turner for the first book I have read by this author.’ – David

This is book two of the series, or book 3 if you want to include the prequel which was written afterwards in the counting, but can be read perfectly fine as a standalone book as you pick up what happened in book one throughout this book.

The book is just as good as book one and follows DS Smith and Witton as they investigate a mass murderer who seems to have a very in-depth knowledge of Smith’s past.

The one thing I love about Stewart’s books is that you know quite early on who the killer is, but can never guess how far they are willing to go, or will go before they are caught, and this book is no exception.

This book follows Smith and Witton as they are trying to uncover York’s first serial killer, who is writing dates on the dead people’s feet after he has killed them.  He is very hard to catch as, even though he makes no attempts to hide once he has made his killing, he wears a disguise each time and changes his appearance and accent all the way through the book.

Throughout the story you know he is leading up to something big as he keeps getting more adventurous with his killings.

When he makes what looks like his final move and kidnaps someone close to Smith, the whole team work really quickly to try and find them before it is too late.

This is a brilliant book, which kept me hooked throughout as I was trying to work out how they would catch him and who he would kill next.

It is also available in audio book through Audible here

After reading English & Drama at three different English Universities and graduating from none of them, I set off travelling and finally ended up in South Africa, where I still live. I enjoy the serene life running a boat shop on the banks of the Vaal Dam. I came up with the DS Jason Smith idea after my wife dropped a rather large speaker on my head. Whether it was intentional still remains a mystery. Smith, the first in the series was finished in September 2013 and was closely followed by Boomerang and Ladybird. Occam’s Razor, Harlequin and Phobia (a series of short stories detailing Smith’s early life) were all completed in one hazy 365 days and Selene was done and dusted a few months later.

You can join the Stewart Giles reader club here: https://mailchi.mp/a64f6de4c541/sgreadersclub