Today I am very excited to be opening the blog tour for Charlie Gallagher’s new book Her Last Breath, which is published by Joffe Books yesterday (23rd July 2018) 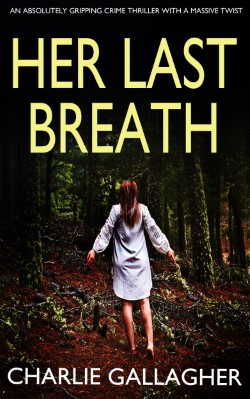 Discover a crime thriller which will have you gripped from the explosive start to one of the most shocking endings of the year.

Henry Roberts is a serial killer. He has a type — young, blonde, attractive women. He is three years into a life sentence.

Two of his victims were never found.

Now, Henry Roberts is dying. He wants to make a deal. Move him to a secure unit by the sea and he will tell the police where the other victims’ remains are.

The offer is accepted and Detective George Elms travels to the force who led the original investigation. He is the messenger. He finds a police force and a community still shattered. As he reviews the old case notes he also learns something else. Henry Roberts didn’t work alone.

A woman goes missing. She fits the profile of the other victims. The circumstances of her disappearance do too — she never made it from her commuter train to her car.

Then a second woman goes missing. George is convinced they are linked. Henry Roberts told him on his prison visit that two is better because: you can make the other one watch.

Time running out for George. He is convinced that Henry Roberts knows who he should be chasing, but will he help before he takes his last breath? Or the women take theirs?

Charlie Gallagher has been a serving UK police officer for ten years. During that time he has had many roles, starting as a front-line response officer, then a member of a specialist tactical team and is currently a detective investigating serious offences.

This is yet anither brilliant page turner by Charlie Gallagher and had me hooked from the start.

One of the things that makes this book so different is that it is set in different locations as George is sent to speak with a serial killer who has told him that if George visits he will tell hin where the bodies of the murdered victims if he can live the last days of his life next to the beach.

The story then takes a twist when another body is found and George is convinced he had an accomplice.

The book is a bit slow to start but this just builds up the tension as we get to learn more about Henry, the serial killer, but works really well becuase of this.

I really liked how the character of George developed and grew throughout the book and his reactions to the workings of Henry are quite reasonable.

The book kept me hooked all the way through and i read it in one sitting, as i couldn’t put it down, it alsi kept me guessimg all the way until the end as i had no idea what would happen.

About the Author
Charlie Gallagher has been a serving UK police officer for ten years. During that time he has had many roles, starting as a front-line response officer, then a member of a specialist tactical team and is currently a detective investigatingserious offences.